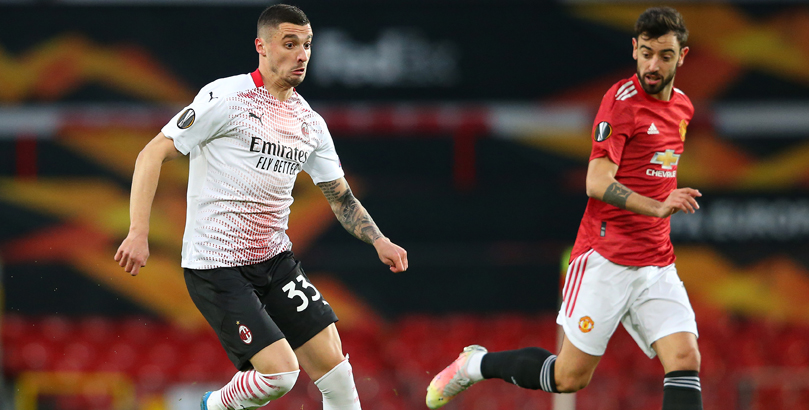 Manchester United’s first Europa League encounter with AC Milan at Old Trafford was a very even contest and few would argue 1-1 was a fair result.

The return fixture in Italy promises to be another close contest, so we can’t see why the Red Devils have been made firm favourites to come out on top.

Getting 11/5 for a home win in what feels a 50-50 match-up is too tempting to turn down and we’re rowing in with the Rossoneri for our first AC Milan vs Man Utd prediction.

Both teams went close to breaking the deadlock in a cagey first half last week, with Franck Kessie having a goal harshly ruled out for handball and Harry Maguire somehow missing from close range.

That looked set to be the decider, but Milan finally got their reward for an industrious effort when Simon Kjaer nodded past a weak Dean Henderson attempt to save in stoppage time.

“We are working to grow and bring Milan back where we belong,” said Stefano Pioli. “These are the best games in that sense, so I was happy to face a team like United.

“It was a great performance and a great result, but we need another perfect performance to qualify against such a strong team.

“I keep repeating to my players that I’m not coaching a normal group. This an extraordinary group, the lads always give 100 per cent in every game, they are just incredible.

“Before the game, we would have been very happy with a 1-1 draw, but we know that we could have earned even more after this performance.”

Milan’s Serie A title hopes have slipped away due to Sunday’s 1-0 home loss to Napoli making it three defeats in six domestic games.

However, we feel they hold a slight advantage going into the second leg of this tie and 5/4 for them to advance appeals from the AC Milan vs Man Utd odds.

Ole Gunnar Solskjaer admitted United were below par in the opening encounter, looking very much second best as Milan led 15-7 in terms of attempts on goal.

“We didn’t win the ball well enough or in good enough positions to find the counter attacks,” said the manager.

“We were too slow, we didn’t move our feet well enough in our half and they played well, to be fair.”

The Red Devils will take heart from an impressive away record in the Premier League this term, while they also thrashed Real Sociedad 4-0 in Turin in the last round.

“We know we have to travel there and score a goal and win the game, or score two and draw,” added Solskjaer.

“That might suit us. It probably will suit us. We’re a team that’s better when we go forward, more direct.”

If the Italian outfit are as sharp on the ball as they were last week, 11/1 for a 2-1 home win could end up great value for our AC Milan vs Man Utd betting tips.

Arsenal vs Olympiacos: Goals to flow in second leg
Champions League history: Which countries have had the most success?
Author