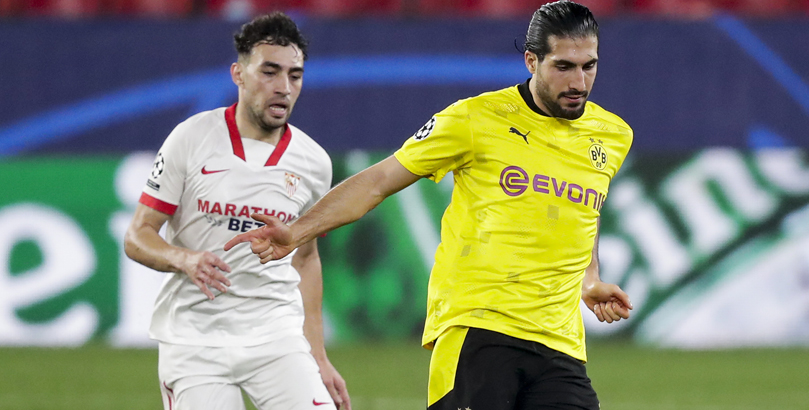 Sevilla simply couldn’t cope with the pace and power of Borussia Dortmund’s forward line in Spain and we fear a repeat scenario in Germany.

Los Rojiblancos did have their moments in a 3-2 loss at Ramon Sanchez Pizjuan, but turning this Champions League tie around will be a tall order.

We’re happy to take 21/20 for the black and yellows to oblige again as our first Borussia Dortmund vs Sevilla prediction.

Sevilla took a fortuitous seventh-minute lead on home turf after a Suso shot deflected in off Mats Hummels, but Mahmoud Dahoud then struck a stunning equaliser.

Erling Haaland continued his Champions League hot streak with two clinical finishes, taking his tally to 18 goals in 13 games in the competition.

However, Sevilla did keep on battling and Oscar Rodriguez hit the woodwork with one free-kick before crossing from another for Luuk de Jong to keep the tie alive.

Dortmund put a rocky domestic patch to one side when impressing in Spain and Haaland said: “I don’t know if you can say it’s down to motivation or passion or whatever, but we were more online.

“It was good. It was not good to let in two goals, but it is good to score three away goals and take them with us.”

A draw or low-scoring one-goal defeat would be enough for Borussia to advance, but that isn’t the way they approach matches.

We’re expecting more positivity from the hosts, who have since netted nine times in three Bundesliga games, crushing Schalke and Arminia before a 4-2 loss at Bayern Munich.

Looking at the Borussia Dortmund vs Sevilla odds, there is plenty of appeal in 7/4 for a home win and over 2.5 goals.

A Look At Sevilla’s Betting Odds

Sevilla went into the opening leg in great form, having rattled off eight straight domestic victories, keeping clean sheets in seven of those wins.

However, Julen Lopetegui’s side had no answer to the movement of players like Haaland and Jadon Sancho, or the attacking nous of Marco Reus.

“We weren’t ourselves in the first half,” De Jong told UEFA. “At this level, you know your opponents will score when you make mistakes.

“In the second half, we did much better and played with a good rhythm and got in a lot of crosses.

“I think it’s important we scored the second goal at the end. We just missed a third goal but I think anything is possible in the second leg.”

Los Rojiblancos have struggled in domestic action since then, though, losing twice to Barcelona in La Liga and Copa del Rey before going down 2-1 at Elche on Saturday.

The Spanish outfit have a number of wily-old professionals that are battle-hardened from last season’s Europa League success, which was a record sixth triumph in that competition.

But past evidence and this season’s form suggests their limitations can be cruelly exposed at a higher level.

Let’s finish off our Borussia Dortmund vs Sevilla betting tips by taking 15/4 for the hosts to prevail 2-1, 3-1 or 4-1 in the multiple correct score market.