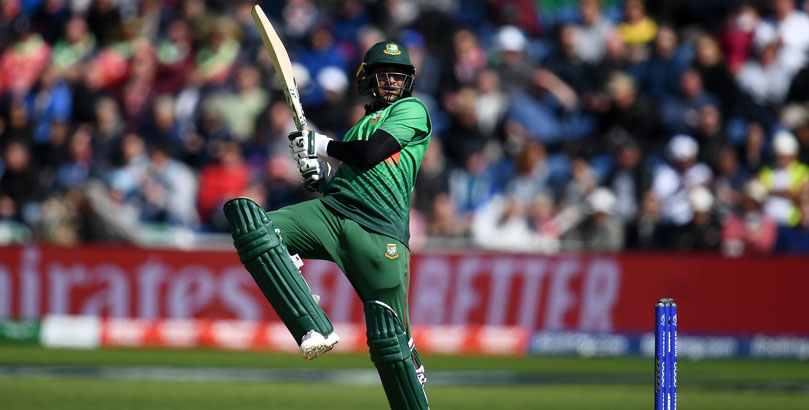 Sri Lanka were thumped by New Zealand in their opener and although they responded with a win over minnows Afghanistan, the rain ruined their game with Pakistan.

The pair both have three wins in their last seven one-day international meetings but, going off performances so far in England, the Tigers to win at 67/100 is our initial Bangladesh vs Sri Lanka prediction.

A Look At Bangladesh’s Betting Odds

Bangladesh opened their campaign with an impressive win over South Africa and ran New Zealand close when attempting to defend 244.

But they were outclassed during their defeat to favourites England, who batted them out the game by racking up a mammoth 386 for six.

The Tigers were never in the running and were dismissed for 280, largely down to the efforts of centurion Shakib Al Hasan.

Shakib said: “We were expecting a better bowling performance in this match.

“But England played brilliantly, credit goes to their batsmen. The way their openers started and the way Jos Buttler finished the innings was the turning point of the match.

The all-rounder is currently the top run-scorer in the tournament with 260, having produced knocks of 75, 64 and 121.

We have successfully tipped Shakib to top score for his country in the last two matches – both at 4/1 – and we are not about to desert him now.

He is the Tigers’ dangerman with bat and ball and is appealing at 7/2 to be his side’s highest run-scorer again in the Bangladesh vs Sri Lanka odds.

Sri Lanka had a chastening start to life in England with a 10-wicket thrashing by New Zealand, who skittled them for 136, and did not perform much better against Afghanistan.

They got the win in a rain-ruined match, but their lack of confidence was for all to see as they suffered a collapse of nine wickets for just 57 runs to be dismissed for 201.

Sri Lanka coach Chandika Hathurusingha said: “I am disappointed with our batting effort. We have to get better.

“We really needed a win, and it will give us a lot of confidence, and I am sure you will see a better approach from the team after this.”

The Lions’ match with Pakistan was washed out, taking them to three points, and they will know a win over Bangladesh is crucial to their top-four hopes.

Skipper Dimuth Karunaratne is in form with the bat after hitting three half-centuries in his last five innings and will need to produce again at the top of the order.

The left-hander is 7/2 to top score for his side in our Bangladesh vs Sri Lanka betting tips.