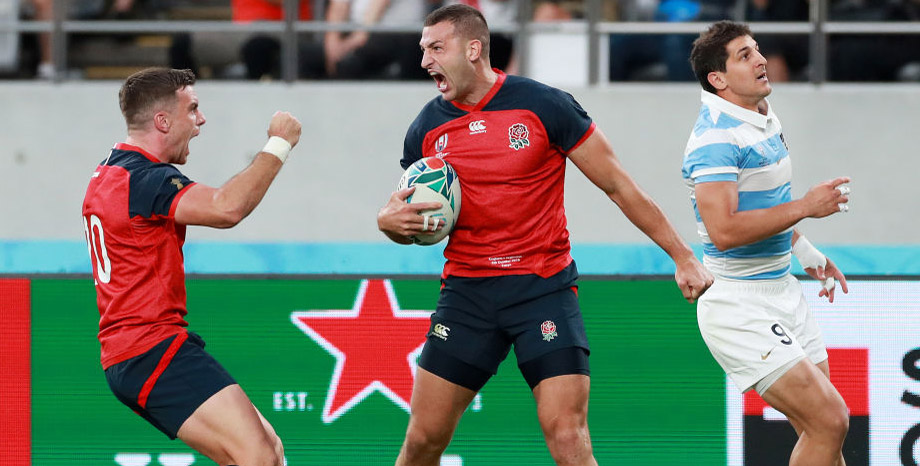 England were beaten by Australia at the last Rugby World Cup but have won all six meetings since then and look in better shape at present.

Eddie Jones’ side cruised through the group stage as Pool C winners, albeit without having to face France, whereas the Wallabies laboured to second place behind Wales.

They did only lose out by four points to the Six Nations champions, though, so 8/5 for them to go down by 1-12 in Oita is our opening England vs Australia prediction.

England were denied the chance to take on Les Bleus in a decider for top spot due to Typhoon Hagibis but there was a lot to like about previous romps against Tonga, the USA and Argentina.

Pummelling the Pumas 39-10 was a particularly impressive effort and everything appears to be in place for the knockout stages.

Jones has made a big call in dropping George Ford in order to beef up his midfield – in expectation of a Samu Kerevi-led assault from Australia.

However, England were superb when beating Ireland earlier this year with Owen Farrell at fly-half and Manu Tuilagi and Henry Slade paired together in the centres.

“We just feel this is our best combination for this week. Kerevi is a damaging ball carrier and defensively we feel like it’s a pretty strong 10-12-13 combination,” Jones said.

“We know Australia are a high possession and high phase team. That’s how they want to play and so there’s going to be a lot of defending in the midfield area.

“We think those three guys are well equipped to handle it. We need to defend with brutality.”

With Mako Vunipola and brother Billy overcoming injury scares, the favourites can field a starting line-up full of power, while Ford can provide fresh legs off the bench late on.

Jonny May, who averages a try every two games, wins his 50th cap on the left wing following a vote of confidence by Jones.

Looking at the England vs Australia odds, May is a worthy favourite at 7/1 to score the first try in this match.

Australia have been regarded as only average for a little while now, losing more games than they have won over the past two years.

The Wallabies did enjoy a morale-boosting 47-26 triumph over New Zealand in July, but were then thrashed 36-0 by the All Blacks in Auckland a week later.

In November internationals, they have been thumped by England by 24 and 19 points on the last two trips to Twickenham.

There was a tight 2-1 series loss to Ireland Down Under 16 months ago, though, so we’re not anticipating a one-sided contest with so much at stake here.

During the current World Cup, Australia lost nothing in defeat when going down 29-25 to Wales in a Tokyo classic, but failed to shine in workmanlike wins over Fiji and Georgia.

Michael Cheika has put his faith in 19-year-old Jordan Petaia at centre alongside Kerevi, with Reece Hodge returning on the wing after serving a three-match suspension.

Cheika admitted he respects England but added: “The bigger focus for me has always been on our team getting our tactics right, getting our mindset right for the game and making sure that all the things we need are in place to get the job done.”

The Wallabies were hit early on by Fiji and Wales, though, so let’s finish off our England vs Australia betting tips by taking 11/4 for the first scoring play to be an England try.

Blackburn vs Huddersfield: Rovers and Terriers to share spoils
New Zealand vs Ireland: All Blacks to be pushed hard
Author